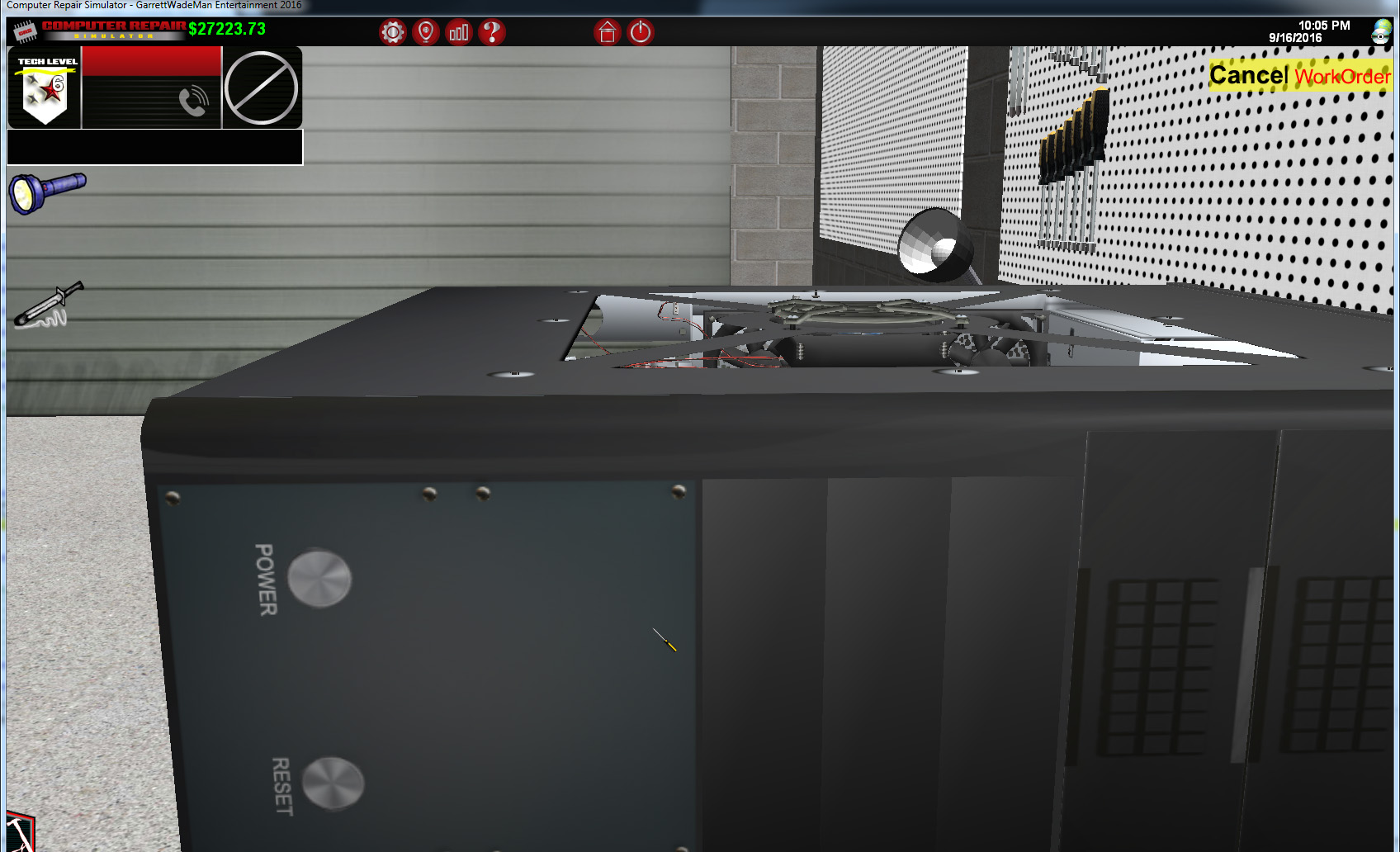 We have many who signed up already to be notified of the release when it is available. If you wish to sign up, all we plan on doing is sending you an email after we upload the demo before the end of September. Until then, here are some updates:

-Fixed a lot of bugs, including a bad Frame Rate bug
-Fixed some bugs from the forum
-Began adding monthly statements for credits / debits, trying to balance the game now 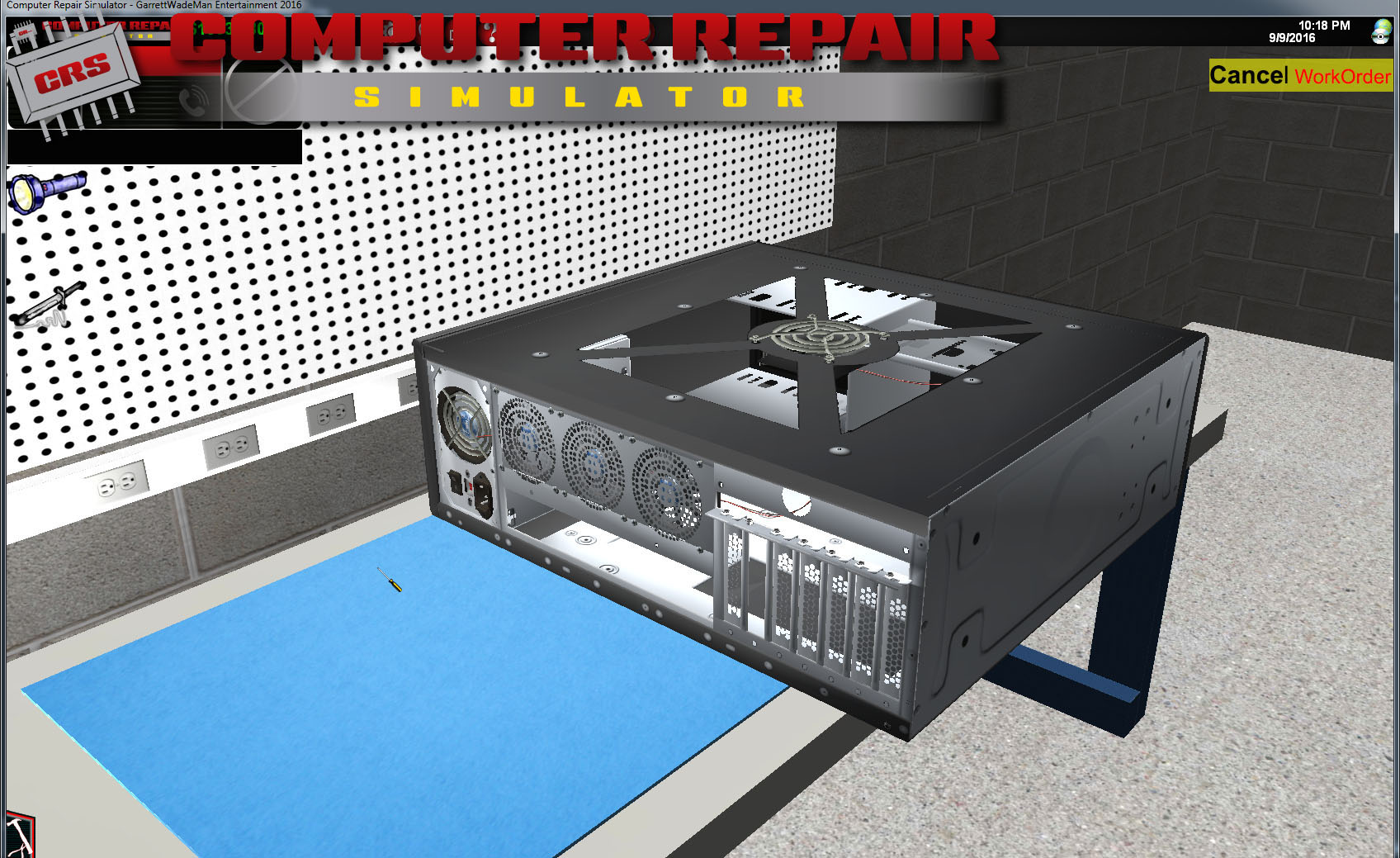 Did a lot of updating to the graphics, fonts, and gameplay. Added a bunch of new skills / stats, along with new scenarios that involve desktop cases. Getting close to public demo release. 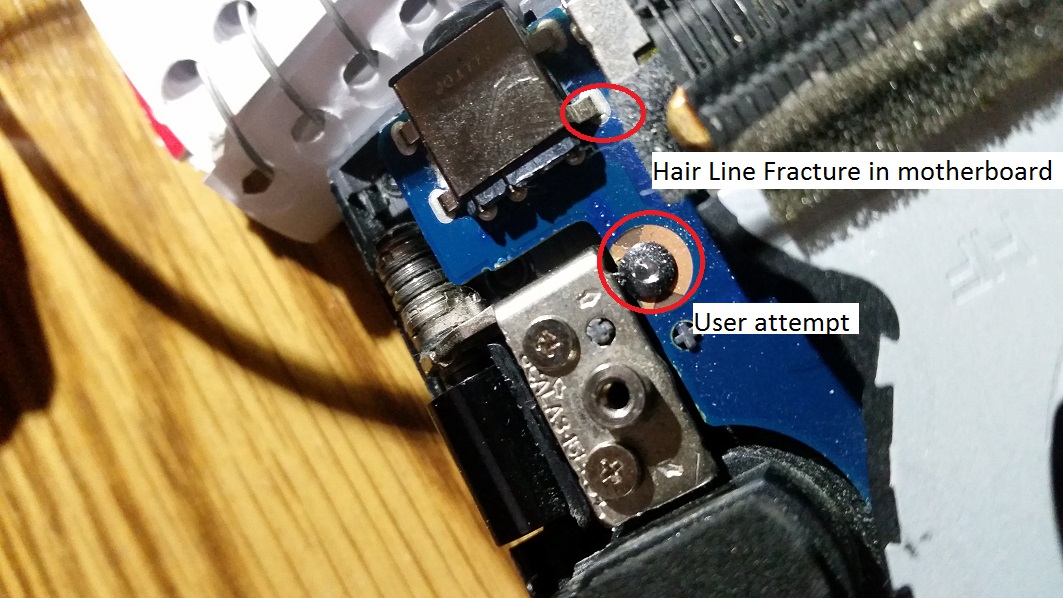 I received this laptop today with the issue of it won’t turn on / charge the battery. The user attempted to do a home repair, which caused a stripped screw that had to be drilled. When the board was removed, I noticed a hairline fracture on the main circuit that broke the internal traces for the power. Even if it could be repaired, it is a small chunk of the board that interfaces with the DC barrel connector, and would eventually get worse. I tried, but this is something I deem as a failed motherboard.

What kind of failures do others run into when fixing laptops?  Am I the only one who gets the off the wall issues? 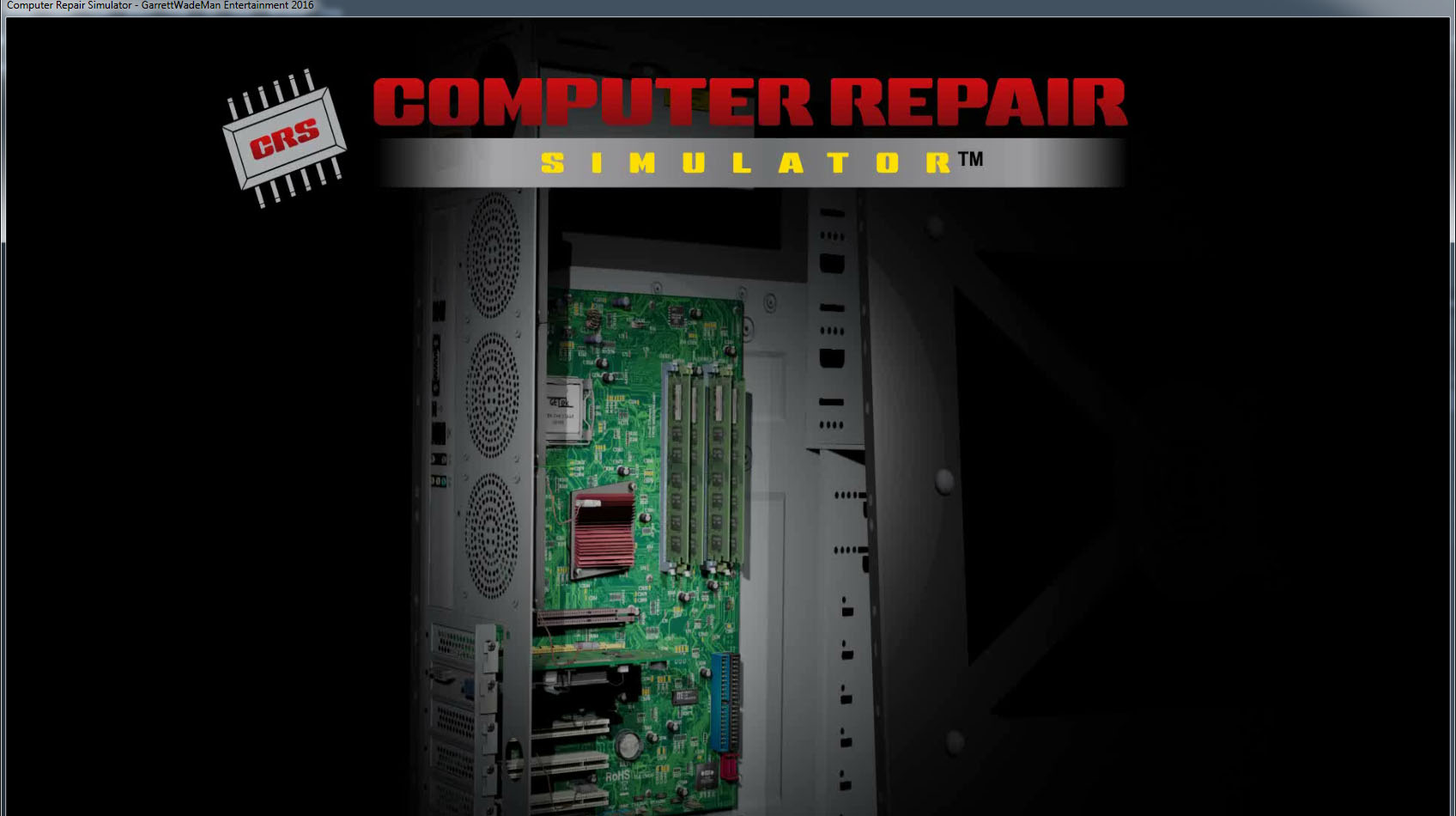 This update consists of the following:
-bug fixes for the tutorial, random, and scenario modes. Some were mixed
-Switching from any mode back to main menu, windows were not right, so we fixxy the bugs
-GRAPHICS are being overhauled, theme creation
-added capacitors to game
-updated intro video
-many other things not mentioned. 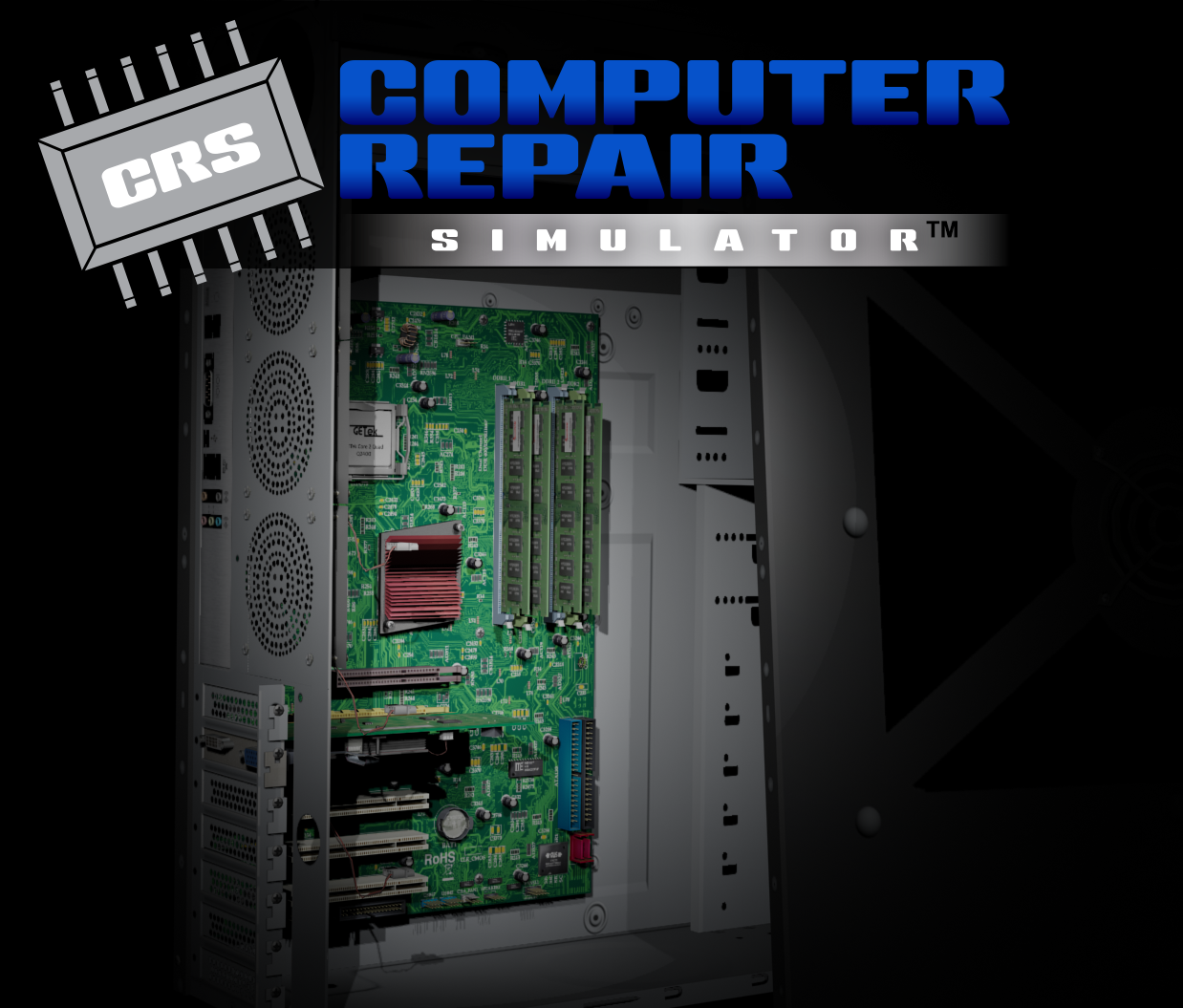 Showing some of the game progress. 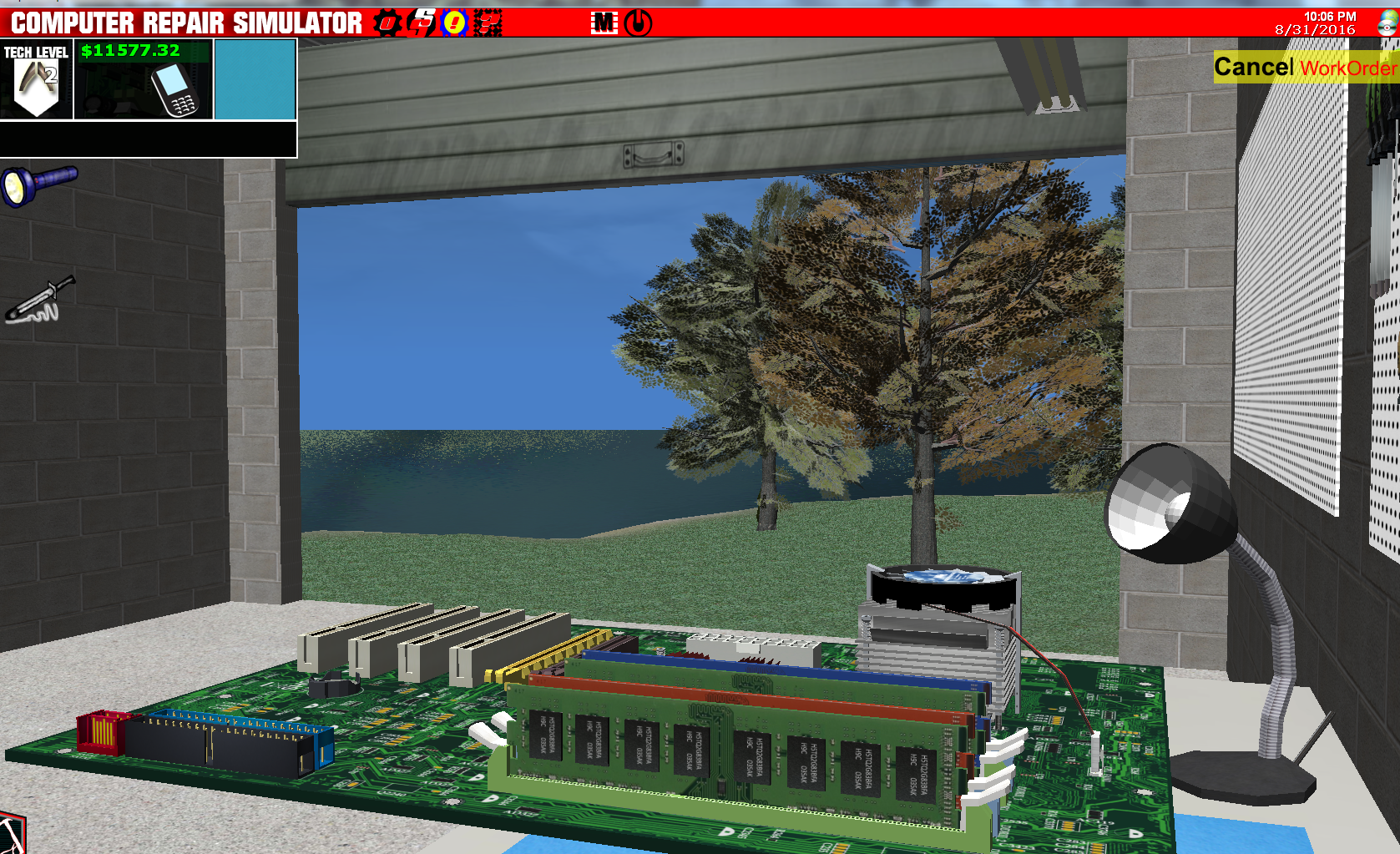 While the graphics artist is creating a consistent scheme, and font style, I have been working on some bug fixes, and expanding into the outdoors.  This will have a special purpose later, but for now, at least you don’t feel like you are stuck in a little tiny hole in the garage.  I may add an easy garage door button to open / close it up.  Just needed to do something a bit different to expand the game experience.

Whats better than fixing computers near the ocean? 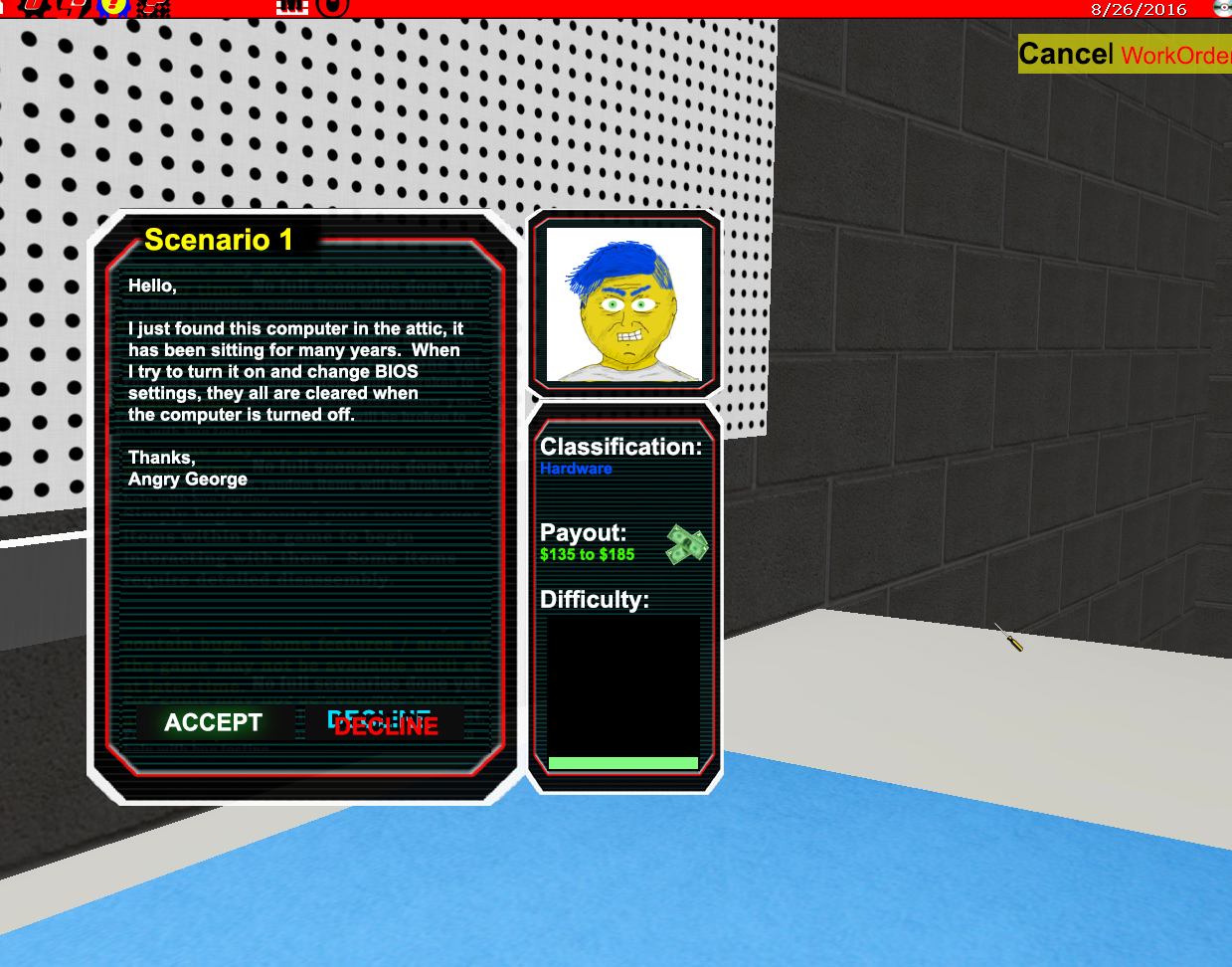 It was early in the year 2014, maybe January, where I was sitting in my basement full of computers and computer hardware.  I am a collector of electronics and assemblies, the guy who thinks to himself that I will need “this” one day for something.  In that same night, I started pondering an idea, a concept, a game.  My notebook began to look like it was dragged through a thorn bush, and pretty soon my desk, table tops, and even floor were covered with notebook paper sketches and tables.  I don’t believe I slept that night because I was so excited about this project.  This boredom turned into curiosity, which then brought my attention to the 3D Game Studio engine.  I began copying code from my other projects I worked in over the course of the years, and before you knew it I had a table top prepared to begin my work “the table top in the game”.  As I began experimenting, I found myself building and modeling all of my computers and computer hardware using the 3D Game Studio Model Editor.  I must have spent over 1,000 hours just modeling every little detail on the computer hardware.  Before you knew it, I made a little video and submitted it to AMD(TM) and Kingston(TM), and the next day I was on the phone with the marketing director speaking about this project.

As I continued to “fool” around with this project, I soon found myself playing my own game.  I then began to think my friends would like it, so I started to share.  Before you knew it, YouTube had several videos uploaded and comments / interest were being developed.  It was then I began to realize this little project was no longer a project, but an opportunity to fulfill my all time dream of developing a video game from scratch.  The project has since grown…

I will be honest, the team (even newly added developers) have been getting pushed to the limits over the past 2 weeks, buried in legal documentation, registration, fees, licensing, etc., but good progress is being made and I am really proud of the team even though stress levels have been extremely high (not to mention I am getting married in 1 month from now).  We absolutely need to do this stuff now in order to have a successful launch.

We have been using the 3D Game Studio modeling tool (MED) up until now for the models in the game, but we have just invested in 3D Studio Max 2017 and additional Adobe graphics tools which will not only make the entire process more efficient, but allow us to do things we have not been able to do before, along with shortening the time to market.  We also plan to use the 3D Studio Max software to sell models to begin raising money for this project.

We also completed the paperwork for Copyright protection which is now in active, along with registering the “Computer Repair Simulator” title with the US Trademark and Patent office which now gives us the legal ability to claim this project as our own.

I also have even better news…

I would like to welcome Brooke Swindell and Andrew MacArthur to the team.

Brooke Swindell is not only my sister, but an amazing graphics artists and designer.  She has experience running large commercial projects related to marketing, advertising, and logos.  She designs some of the top commercial business signature logos in the market.

Andrew MacArthur is not only my my best friend and considered a brother, but he is an excellent sound engineer.  Andrew has top end equipment for sound and sound FX recording and will be creating sound FX for the game.  This poor guy will need to spend his Friday / Saturday nights taking apart computers recording every sound 10 times.  Not to mention he owes me a sound clip of a human being eaten by a dragon, not sure how he will figure that one out.

Also, even though we have been swamped in legal items, I have managed to continue adding to the game…little progress, but good progress.

Just wanted to let everyone know that we are ramping up on the back end to prepare for release of a demo.  There are a lot of items which must be taken into consideration to protect us.  Some of these items include Copyright / Trademark registration.

Please be patient with us as we work out the legal details, we want to prepare for a successful launch.

Thank you for your support.

We are making a BIOS and and OS for the game . Here’s a preview: 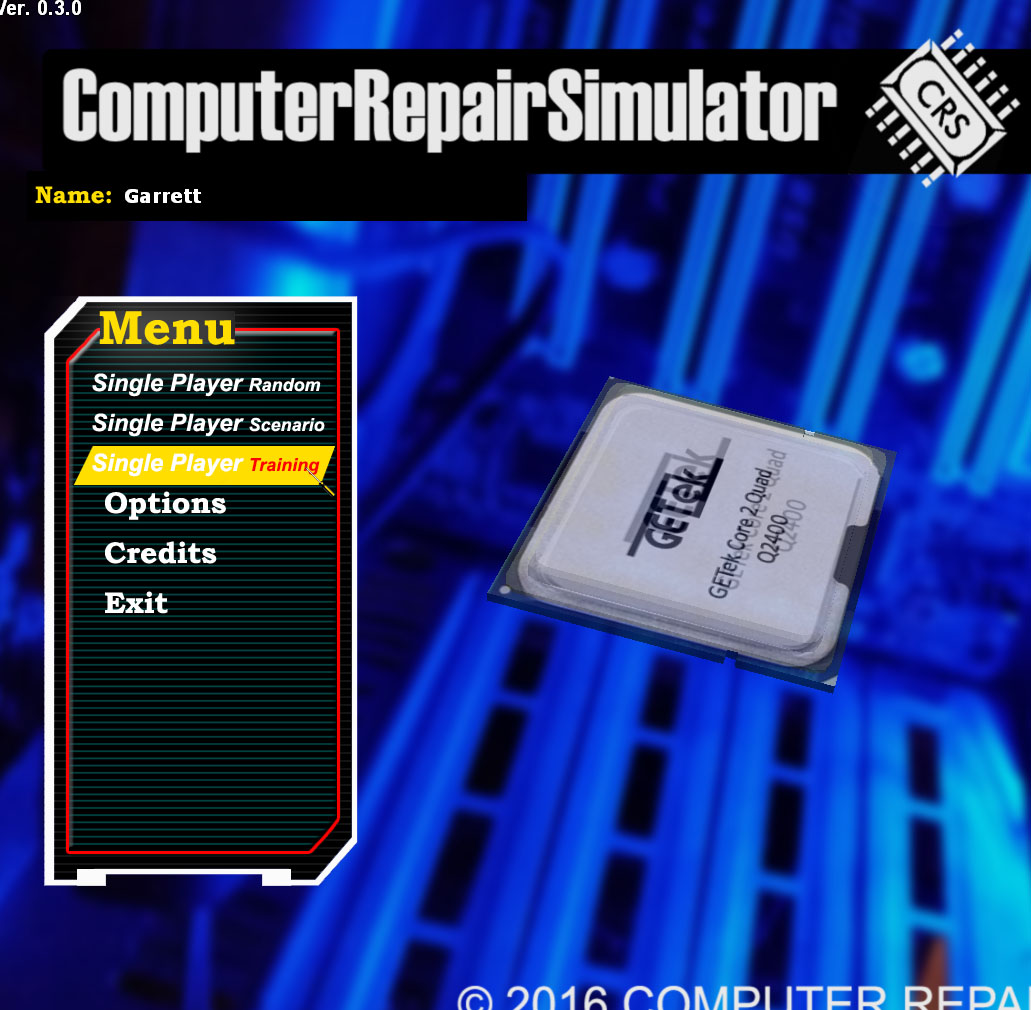 Added three play modes, each offer its own benefits.  I only started working on these, so after some time I should have some pretty fun stuff.

Random:  Random items will be broken and when board is completely repaired, you beat scenario and get another.  Each round offers their own rewards.  This is really used for fun / bug testing all items.
Scenario:  This will be scenario based situations that links problems with actual failures that need to be analyzed and resolved.  Use the skill you gain from the Training to take these on as they will get more and more difficult.
Training:  This is the one item I am coding first as it verifies controls are understood, and explains how the game is played.  Once you pass the basics, you begin to learn about technology as it is broken down and explained piece by piece.  You will learn terms, methods, hardware, and general technology while traveling through the ranks of training.